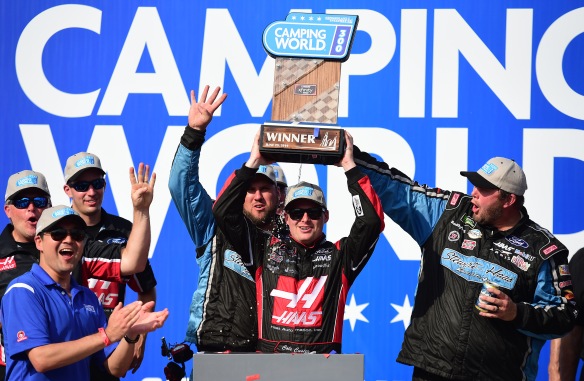 JOLIET, Ill. — Cole Custer led more than three quarters of Saturday’s Camping World 300 Xfinity Series race at Chicagoland Speedway on the way to a dominating victory and his fourth victory of the 2019 campaign.

“Our car was pretty good all day,” Custer said after the race. “The problem is it is never going to be absolutely perfect here. The track is so slick and everything. You have to have it the way you want and manageable. It changed a lot through a run and I really worked the brake bias a lot today trying to help the handling a little bit, and that helped us a lot. We had a great car. I don’t think anybody had anything for us. We made little to no adjustments all day.”

One of the few drivers who did have something for Custer during the day was defending Cup Series Champion Joey Logano, who led 20 laps on the way to a second-place finish. Logano praised Custer’s performance during the 300-miler.

“Cole did really good,” Logano said with a laugh. “I got to race around him a lot. He executed the restarts perfectly. He had the fastest car and he made the most of that. I thought he did good.”

“I was impressed with what Cole was able to do up next to the wall,” Logano said. “As aggressively as he was entering and being able to keep it off and run a smart race. That’s hard to do when you’re young.”

Custer said later that he appreciated the compliments from Logano.

“That is huge,” he said. “Joey is a series champion and it was fun racing with him today. I think we had the better car and that was a huge part of it. I think it is fun racing against those Cup guys. They set the bar high. It’s good now how they have it. I think we put on better racing when we are by ourselves, but you still get that benchmark for when the Cup guys come down to know where you’re really at.”

One of the biggest moves of the day was made by the teams of Michael Annett and Noah Gragson. Both drivers stayed out until the end of a fuel run late in hopes of a caution, which came out just before the two would come to pit road, allowing them to lead the field to the pits and come out ahead.

Annett called the strategy amazing and said the caution fell perfect for him.

“(Crew Chief Travis Mack) was about to call me in that lap, then it came,” Annett said. “So it fell perfect for us and got those tires and got the lead, and knew it was going to be hard to hold off those guys that led the whole race. They were on the top of the board all weekend, so you try not to get down when they get around you on those restarts, knowing that they’ve been faster than you all day and there’s no magic switch. A couple of them got by me, but then we were able to hold off the guys that we should have and got a top five.”

Annett finished fourth on the track, though he was moved up to third when the No. 20 car of Christopher Bell was disqualified for failing post-race tech.

Gragson fell back to seventh after getting into the wall late.

“We just struggled with front grip there at the end of the race and it was an up-and-down day all day,” Gragson said. “Just got to keep digging and we’re not going to quit. We’re going to keep on pushing until we get to Homestead making baby steps.”

As for how close he was on fuel before the final pit stop, he said he wasn’t sure.