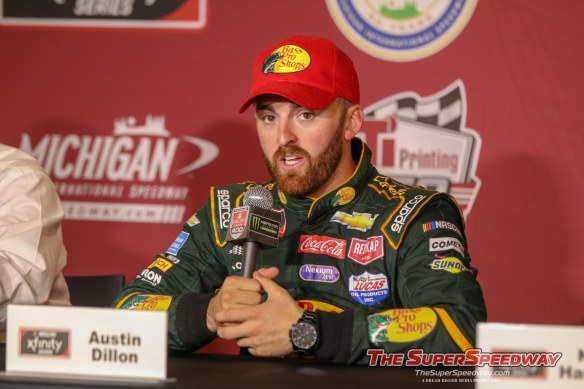 BROOKLYN, Mich. — Austin Dillon was in the right place at the right time when NASCAR threw the caution for rain to end the LTi Printing 250 at Michigan International Speedway, getting his ninth win in the Xfinity Series in 138 starts.

“This feels good,” Dillon said after the race. “Me and Nick (Harrison, crew chief) had gotten in a run of a couple wins a couple years back and we felt like put us back together and we could go do it again and that’s on our second race this year? Third?”

“You put us together, we’re a pretty good duo it looks like,” Dillon said. “We’ve got a pretty good win percentage together. It’s nice to be back with him and that group.”

The win was Dillon’s first at MIS. The race ended with 91 laps of 125 complete due to rain, which delayed the start of the race for several hours and threatened from about lap 60 on.

Dillon and Harrison both said the rain played into how they ran the race.

“It was our strategy, I believe,” Dillon said. “We had a pretty fast car. We figured out track position was pretty important. Our car was handling well into a ru. That kind of factored into it.”

Dillon said Harrison made a call that eventually put them in position for the win.

“With the cautions and Austin saving, we could go clear past (lap) 100,” Harrison said. “But weather was definitely a — we made our strategy and we stuck to it and I got the OK from Big Dog down here on the end (team Owner Richard Childress) so it made me feel a little better about my call.”

It was a one-two finish for Richard Childress Racing, as Daniel Hemric scored a career-high second-place finish, earning his first top-10 at MIS in two races. It was his ninth top-10 of the season.

Hemric said after the last restart, as he was playing the rain game, he made his move to try and get the win.

“They kept telling me the rain was 10 minutes away for 30 minutes,” Hemric said. “I thought, well surely it’s going to rain. So I tried to pull a slider there on the 61 (Kaz Grala), which he did a great job of putting himself in the position there as well. I tried to clear him. I thought I was about a foot and a half too short and I’m sure when I watch it back it may not have been as close as I thought it was. But I tried to make the move because I knew the rain was there.”

“I’d get a couple sprinkles here and there but I made the move probably a lap too early and got myself hemmed up on the bottom,” Hemric continued. “Luckily I was able to rebound for second because I really thought I was going to be about 15th by the time we left the next corner, but fortunately that’s not the way it worked out.”

There were 14 lead changes among nine different drivers in the race. Kyle Busch led the most laps, leading almost all of the first stage before losing the lead at lap 31. He would not get back to the lead after that, finishing in sixth. There were 10 caution flags for 37 laps. 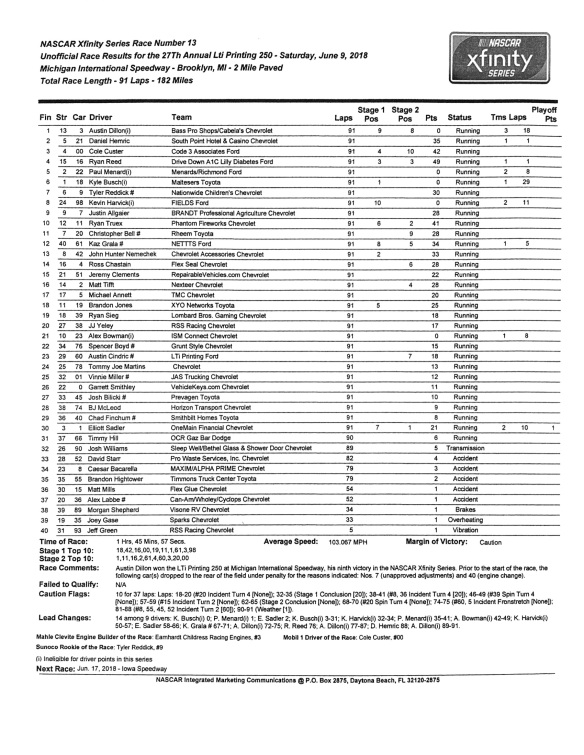