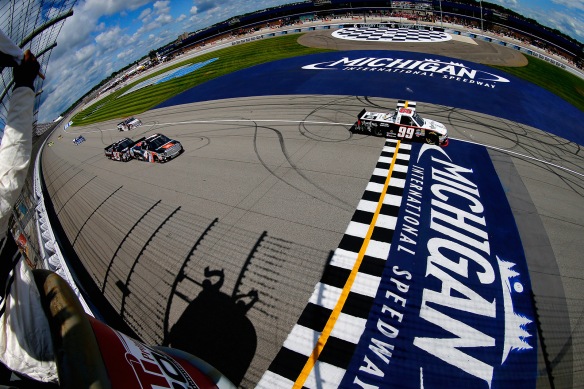 BROOKLYN, MI — He still gets to keep the trophy, but Darrell Wallace Jr.’s victory at Michigan International Speedway in Saturday’s LTi Printing 200 has been deemed encumbered after his No. 99 truck failed post-race inspection.

Wallace received an L1 penalty because “vent holes at the bed top must be configured for air intake only” according to the penalty report issued by NASCAR Wednesday. As a result of the penalty, Crew Chief Shane Huffman has been fined $5,000 and suspended for one race and the team has lost 10 owner points.

The No. 98 team of Grant Enfinger also received a couple of penalties issued Wednesday, including an L1 penalty because post-race heights did not match NASCAR tolerances and a safety violation for weight affixed improperly. Crew Chief Jeff Hensley and Truck Chief Josh Hankish have been suspended from the next two truck series post events, and the team was assessed with a 10-point penalty in both the drivers’ and owners’ championships.