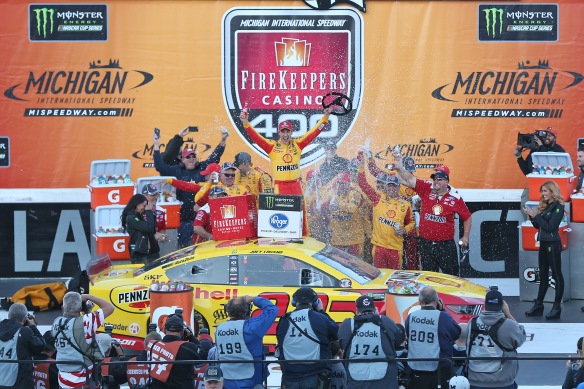 BROOKLYN, Mich. — After a 27-hour delay due to weather, it took three extra laps to determine the winner in Monday’s FireKeepers Casino 400 at Michigan International Speedway. But Joey Logano, who dominated the race, was able to hold of challenges by Martin Truex Jr. and Kurt Busch during an overtime finish to take the checkered flag and his third win at the 2-mile oval.

“It was nice to be able to show that the car had a lot of speed throughout the race,” Logano said. “I’m proud of that. What I’m more proud of though is the way we handled everything throughout the weekend. We unloaded with speed, but the car didn’t drive good. We were able to put some handling in the car, got the car driving decent. Qualifying on the front row and putting it on the pole is huge. That paid dividends throughout the whole race.”

“You don’t have days like that that are so close to perfect,” Logano said. “That doesn’t happen very often in our sport. So I’m very proud of the effort that we’ve had really the last few weeks.”

Kurt Busch was able to bring home a second-place finish after passing Martin Truex Jr. during the green-white-checkered. He and Truex worked together before the final caution to track Logano down.

“Logano’s car was strong,” he said. “He led the most laps today and it was going to be tough to beat him, and it was going to take two of us. Truex and I, we were synced up. We definitely had the vibe with him. We were drafting well to catch the 22, then the yellow came out. And after that it’s kind of every man for himself. I got a draft by the 41 down the back straightaway. I cleared the 19. I just didn’t have enough speed to catch the 22.”

Kurt said if the caution hadn’t come out late for Erik Jones’ crash, he had a different strategy to get the win.

Truex said he didn’t know if there was anything else he could have done to get past Logano.

“Hats off to those guys,” Truex said. “I thought we’d rack them up there, you know, green-white-checkered. I thought, hey, maybe we do have a shot at this thing and then he jumped the restart by over a car length. I don’t know, I guess they don’t enforce those rules anymore. We’ll have to remember that next time.”

Despite struggling through much of the race Kyle Busch was able to battle back to a fifth-place finish Monday on a track he has not liked in the past. Kyle has been vocal about the current package, but said his car just wasn’t strong enough to mount a challenge at Michigan.

“I think we got more than what I thought we were going to there most of the day,” Kyle said. “I don’t know, hard to have a fast car. The fastest car here led about every lap, right? We certainly didn’t have enough speed. We didn’t bring enough speed here this weekend, but we adjusted on it all day long. Adam (Stevens, crew chief) and the guys made changes. We pulled packer, did rounds, track bar, wedge, everything, and there’s nothing left, I guess.”

Kyle also questioned whether Logano may have gone a little early on the final start.

“Twenty-two may or may not have jumped the restart a little bit and got out and got clear, and pretty monotone after that if you ask me,” Kyle said.

Kurt said Logano went early, but not outside of the rules.

“Logano knew he had to go early, and that was his best chance to squirt ahead of the 19, and that’s what changed the complexion of the race,” Kurt said. “That’s what I would have done if I was in his position.”

Logano denied jumping the start after the race.

“I was able to see it right in front of me,” he said. “I hit it when I got there. I had a good start though, wasn’t it? That was a good one. That one felt good.”

After a pit road penalty early in the race put him down a lap, Michigan’s Brad Keselowski was able to battle back onto the lead lap and finish sixth.

“Just didn’t put it all together,” Keselowski said. “We were in a really good spot and then had the pit road penalty. Lost a lap and took us until about 70 to go to get it back. Kind of miraculous that we got back up to sixth to be honest. Just have to execute the entire weekend. It just didn’t happen today.”

Asked if he could have done what his teammate did if he had the lead, Keselowski said he didn’t know.

“I never got there to see,” he said. “Never got the chance to find out.”

There were 20 lead changes among 11 drivers Monday. There were seven cautions for 35 laps. The time of the race was two hours, 52 minutes and 50 seconds.