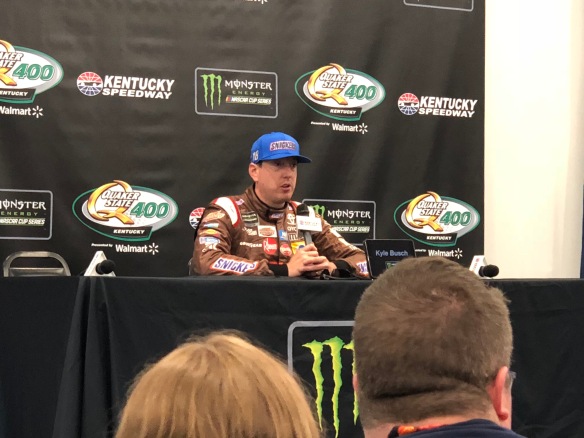 SPARTA, Ky. — Kyle Busch told reporters Friday during media availability at Kentucky Speedway that Ricky Stenhouse Jr. did not reach out after contact last week at Daytona that took out Busch and William Byron among others in one of several big wrecks at the superspeedway.

“I am disappointed that he did not,” Busch said.

Stenhouse clipped the left rear corner of Busch’s car on lap 66 of the Coke Zero Sugar 400 at Daytona International Speedway last Saturday night, turning Busch, who was running second, into leader William Byron and triggering a seven-car wreck that ended the nights of both Byron and Busch. It was the second crash that Stenhouse was involved in, as contact from Stenhouse also triggered a 26-car wreck on lap 55. Brad Keselowski, who was also involved in the crash, blamed that wreck on a bad block from Byron. As Keselowski lifted, Stenhouse pushed him from behind going into turn three to trigger the crash.

Busch said based on the two crashes, Stenhouse should have been contacting several drivers to apologize.

“He wiped out half the field,” Busch said. “I’m pretty sure there’d be a pretty busy Monday for him. But there wasn’t. So apparently he just doesn’t care.”

Asked if he will race Stenhouse differently as a result, Busch said he wasn’t thinking about it.

“I can’t worry about people that far back in the field,” he quipped.

Busch said he is of the mindset that if a driver feels bad for contact they make in the race, they should contact whoever they hit and apologize.

“When I make mistakes or when I do things that I feel hindered other drivers, then I always reach out and just say something like, ‘Hey man, I hate I got into you. I’m sorry.’ Whatever, it’s not going to change the fact but at least you took that step. That’s my mindset. Other drivers have different mindsets.”

Stenhouse originally declined comment, but after his qualifying run he leaned in Busch’s car and talked to him. Stenhouse was asked afterward by NBC during its coverage of qualifying if he had a change of heart.

“Not really a change of heart,” Stenhouse told NBC. “I just told him why I didn’t reach out. I felt like he ran his mouth enough on his radio and then after the race that I didn’t really have anything to say to him. I honestly feel like I normally do reach out to people when I make mistakes, and I clearly made a mistake. But with him running his mouth I just felt like I didn’t really need to call him.”

Stenhouse said he told Busch to choose his battles wisely, because while he’s not running up front now, he could be down the road, or Busch would need to lap him.

“‘You will have to deal with sometime whether you’re lapping me or we get our cars better and we’re running up front racing with you,’” Stenhouse said. “I told him if he wanted to keep running his mouth, he could come over and do it around me and I’d stop it for him.”

When asked whether the issue was over, Stenhouse said it was.