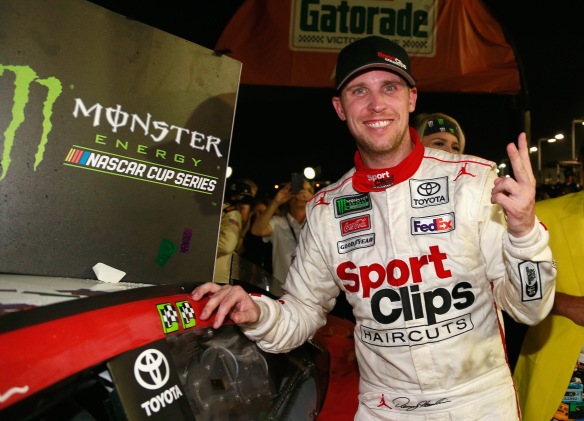 Denny Hamlin, driver of the #11 Sport Clips Toyota, poses with the winner?s decal on his car in Victory Lane after winning the Monster Energy NASCAR Cup Series Bojangles’ Southern 500 at Darlington Raceway on September 3, 2017 in Darlington, South Carolina. — Photo by Matt Sullivan/Getty Images

It wasn’t a three-way sweep like two weeks ago at Bristol, but JGR’s Denny Hamlin got the late-race pass on Martin Truex Jr. to score his second win of the season and his second Southern 500 victory.

Hamlin overcame a pitroad miscue earlier in the race when he missed the entrance to pit road, costing him significant time. But he was able to catch Truex after being down 20 seconds to pass him on Lap 365 when Truex got into the wall and cut down a tire. Hamlin cruised the last two laps to the win.

“To win in the Flying 11 and to win the Xfinity race, to win the Cup race, both in very exciting fashion was a great feeling, and tonight through the adversity of missing the pit road and coming back,” Hamlin said after the race. “We had great strategy, a fast car, and it all just worked out in the end. I was hoping it would. Otherwise I would have looked pretty silly after the race trying to explain why we lost.”

Truex told the media after the race that without the blown tire, he was doing everything he could to stay ahead of Hamlin.

“Well, the plan was to try, you know?” Truex said. “I didn’t know how far back they were. I didn’t know how fast they were going. I didn’t know how many laps fresher their tires were. They told me that they thought I could hold him off and they gave me the intervals and how fast he was catching me. With two to go, I seen him coming, but catching somebody and passing him is a whole different deal here, and I was really holding my own pretty well if I could get some clean air, and every time I’d catch a lap car they’d just drive off in the corner, slide up in front of me and then I was just so loose on those old tires around other cars that there wasn’t much I could do to keep my pace, my momentum.”

“That was really the only reason he even caught us, besides the flat tire,” Truex continued. “I don’t know, we may have blew a tire either way, obviously, you never know. But it’s interesting, Cole said he wanted to wait two more laps to pit, and with two to go we blew a tire. It’s crazy how those things work out sometimes.”

The series now heads to Richmond Raceway for the Federated Auto Parts 400 Saturday night. The playoff future of several drivers hinges on that one race, as without a win, Clint Bowyer, Erik Jones and Joey Logano will miss out on the playoffs this season.

The biggest story would be if Logano missed out, as he actually has a win at the first Richmond race this season, but the win was deemed encumbered after Logano failed post-race inspection, making the race ineligible for qualification into the playoffs.

Most thought Logano would get another win, but the team has struggled this season since the penalty, and that win hasn’t come, leaving him currently on the outside looking in. Logano has eight top-fives this season, 11 top-10s and one pole. He’s led 257 laps this season, with an average finish of 16.5.