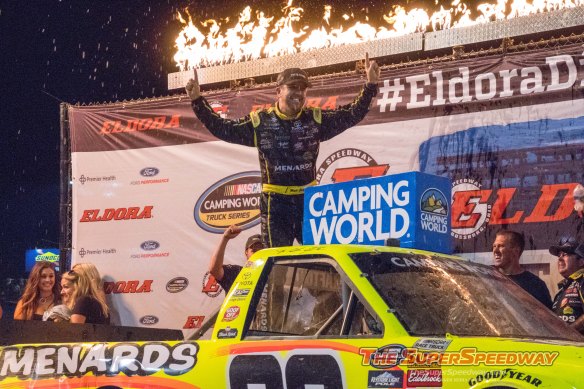 ROSSBURG, Ohio — Matt Crafton isn’t a dirt racer, but he was able to hold off some tough challengers to take the win in the fifth-annual Eldora Dirt Derby Wednesday night.

Crafton passed Stewart Friesen late in the race to take the win.

Crafton started the race winning the first stage when the caution came out immediately after he passed Friesen to take the lead. Crafton said the truck was good at the beginning of the race, but he asked for some adjustments at the first stage break.

“I thought we were a little bit too free at that point, and I had (Crew Chief Carl “Junior” Joiner) tighten it up and then the second segment, we were way, way too tight,” Crafton said. “We fell back quite a ways and Junior was pissed off at me because I had him over-tighten the truck.”

So the crew put the truck back to where it started for the final segment.

“We went right back to where we started the race and I just learned how to drive it, and Rico (Abreu) and Christopher (Bell) went by me on the top, and I just had to save my stuff,” Crafton said. “I just had to have something to race there at the end. I knew I just couldn’t put it up there like Rico — he kept pounding the fence and he put on a heck of a show without a doubt, but I kept saying, ‘I can’t do that yet. I’ve got to have something here at the end to race these guys.'”

But as the race wound down, Crafton moved to the high groove.

“When the pay window opened, I finally put it up there and took advantage of it,” Crafton said.

The win was Crafton’s 14th in his 395 Camping World Truck Series career and his first win of 2017, essentially locking him into a playoff run.

Friesen led the most laps on the night with 93. Crafton led 24, Christopher Bell led 22 and John Hunter Nemechek led 11.

Johnny Sauter left Eldora maintaining his points lead over Bell, but losing some ground after Sauter was involved in an accident on lap 20. Just a few laps after going back to green, Bell spun in turn two and was collected by Kaz Grala. Grala would go to the garage and Bell’s crew would work on his truck, keeping him in contention for the win.

But Bell would cut down a tire on a late restart, sending him to the pits once again. He was able to rally for a ninth-place finish, while Sauter finished 23rd, reducing Sauter’s points lead to just seven points heading into the series’ next race at Pocono.

The official time of the race was one hour, 45 minutes and 44 seconds. Average speed was 42.560 mph and the margin of victory was 1.960 seconds. There were seven lead changes among four drivers.