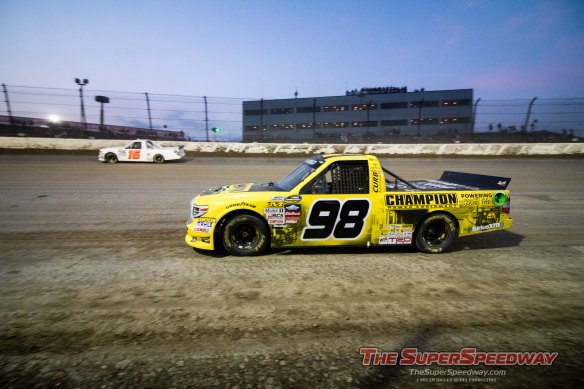 ROSSBURG, Ohio — The showcase race for the Camping World Truck Series, the Eldora Dirt Derby, brings with it some unusual rules once a season when the trucks take to the dirt in Ohio.

Here are a few notes from the drivers meeting tonight:

• Pit road speed is 30 mph. Drivers have nothing to gain by speeding on pit road, as the lineup will be set as they came into pit road.
• All cautions tonight will be quickie cautions.
• Caution laps do count during the 150-lap main event, but the caution laps between stages WILL NOT count.
• The field will be split into two for pit stops. When pit road is open at each stage break, the first 16 trucks will be brought down for service. They will have three laps to complete anything they would do on a normal pit stop. When they come off, they will line up in the same order they came in. If a truck doesn’t roll after three laps, they will go to the back of the field.
• When the first 16 are done, positions 17-32 will be brought down and have the same procedure.
• There will be no overtime in the heats. Overtime in the final works the same as any other Camping World Truck Series race.
• Drivers will have a four-wide salute during the pace laps prior to the main event.